REUNION ISLAND: ONE DAY PADAYATRA IN THE CITY OF St PAUL

On Saturday July 23rd, only one week after a 3 day padayatra in the island of La Reunion, another group of devotees headed by Rama Gopal Dasa and his wife Radhika Dasi organised  another padayatra in honour of ISKCON’s 50th anniversary.  This one took place in the city of Saint Paul on the West Coast of the island. A few days before I advertised the event by speaking on bhakti yoga on two local radio stations; I also encouraged people to join our padayatra.

We started at the City Centre where about 40-50 people joined the procession, walking and joyfully chanting the holy names. We then walked to a local market on the beach front which is open every Saturday. Everyone was so happy to see us, especially all the ladies dancing in their colourful saris. People enjoyed the kirtana –the beating of the mrdanga and the sound of the conch shell. While there we also distributed 473 small packets of delicious halava sweets and banana pakoras made by Bhaktin Bernadette and Rama Gopal Dasa.

We were very fortunate to have a local television station filming our padayatra. The station aired a short report on padayatra during the midday and evening news. The procession went on for two hours and ended with kirtana in front of City Hall. Afterwards we distributed 275 plates of prasadam consisting of koftas balls and fried rice with vegetables lovingly cooked by Radhika Dasi, Bhakta Raynaulds and his wife Patricia. I distributed 15 books and many leaflets inviting people to attend our regular house programs since La Reunion Island does not have an ISKCON temple yet. We regularly organize programs in St Denis, the island’s capital, at either my home or Rama Gopal Dasa’s place on the west side of the island.

Later that afternoon the kirtana was still going strong with all the devotees singing ‘Jay Prabhupada!’ We felt very thankful to  ISKCON’s founder-acarya, A.C. Bhaktivedanta Swami Prabhupada, for the many wonderful things  he has given the world.  Srila Prabhupada Ki Jaya! 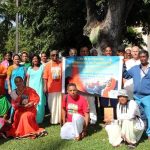 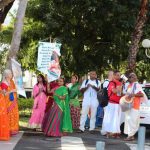