Attraction to Their Lordships denotes a fortunate soul

Having gained spiritual strength in Pandharpur dhama for our preaching mission, on July 27 the Maharashtra Padayatra resumed and headed for Kasegaon village 10km away. Our spiritual master, Lokanath Maharaja, blessed us for the journey ahead and he and several temple devotees walked with us to the outskirts of Pandharpur.

As we made our way towards Kasegaon singing and dancing, we stopped briefly for a rest. We unyoked the oxen and were all sitting when I noticed a dog also sitting near the chariot. I thought it would go away as soon as we left and was just hanging around in the hope of being fed.

Eventually we moved on and to my surprise I saw that the dog was walking behind the chariot and was still with us when we reached Kasegaon. We gave him prasadam to eat and he looked very happy as the sankirtan began. We stayed for one day in Kasegaon and the whole time the dog never left the chariot. I felt he was much attracted to Their Lordships.

The next day he was still with us as we performed sankirtan and prasadam distribution in Khardi village. The following day he was again ready to travel with us but, unfortunately, he was hit by a vehicle and died. He had walked about 25km with us. All the padayatris were very sad as the dog had been with us since Pandharpur and we all thought he would be with us from now onwards.

The villagers were surprised to hear that the dog had followed us from Pandharpur and they performed the last rights for him. I had a similar experience in the Vraja-mandala Parikrama when a dog followed the parikrama party. I felt our padayatra dog was a fortunate soul. He never barked at anyone and ate whatever we gave him. The best part was he never left the chariot. Definitely he will achieve a beneficial destination.

Padayatra also gives an opportunity to the animals to hear the holy name.

All glories to the padayatra.

All glories to Srila Prabhupada. 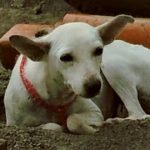 The fortunate dog in padayatra 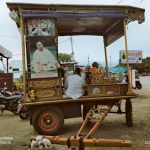 Sitting near the chariot