I am always waiting for the month of Kartik for that is the time to run to Vrindavan dham and the best part of Vrindavan is the Vraja-mandala Parikrama. It’s a wonderful experience and the whole world is now becoming aware of the parikrama and its darshan sthalis, the pastimes related to the holy places, due to a book written by my spiritual master, Lokanath Maharaja: Vraja-mandala Darsana is available in Hindi, English and also in Russian. Once you have read it you will die to come on parikrama.

This year was the thirty-sixth parikrama, an event that has continued without obstacle through the mercy of the boss of Vrindavan, Srimati Radharani. Only because of Covid did the government not permit more devotees to attend parikrama last year and consequently in 2022 there was a large number of devotees wanting to participate.

During the first few days of parikrama it was raining heavily. It was like Radharani was testing who really wanted to join parikrama. All the devotees were worried whether parikrama would take place this year or get cancelled. Other parikramas had been cancelled, but I had full faith that Radharani would take care. Our group decided that whatever happened we would not go back, we would stay in Vrindavan, but getting a room in Vrindavan for one month during Kartik is difficult. Management was also worried as registration went on: devotees were enthusiastic and queuing to register in the rain, as if their desire to walk in Vraja would compel the Lord to stop the rain.

On Vrindavan Parikrama day everyone assembled at the Krishna-Balaram temple and after Tulasi arati all were ready to walk. Two devotees held the parikrama banner as Sri Sri Nitai-Gaurasundar and Srila Prabhupada moved ahead to lead the procession, and taking the blessings of Sri Sri Radha-Shyamsundar, Sri Sri Krishna-Balaram, Sri Sri Nitai-Gaurasundar and Srila Prabhupada and the assembled devotees we all did parikrama of Vrindavan. That afternoon there was an istagosthi in the prasadam hall as Lokanath Maharaja, Radha Raman Maharaja and Bhadra prabhu guided us for parikrama. Because it was raining, it was decided we would take buses to Mathura, Madhuvan, Bahulavan and Sanatana-kunda and in the evening there would be katha in the prasadam hall.

This year was the golden jubilee of Lokanath Maharaja’s initiation by Srila Prabhupada and there was a grand celebration at Govardhan. To go on Govardhan Parikrama was Prabhupada’s last desire – he would go on a bullock cart and Srila Gurudev would drive the cart. This year it was all the Lord’s arrangement. He sent rains so the devotees did parikrama by bus, joining Srila Prabhupada’s bullock cart procession on Govardhan Parikrama and that evening returning to Vrindavan. The Lord fulfils the desire of His pure devotees.

On October 16 the parikrama devotees went by bus to Radha-kunda for Bahulastami snana, the appearance day of Radha-kunda, and it was following that programme that the actual parikrama started, along with my service as a doctor to the party. The next day it was wonderful to be walking in Vraja dham with the devotees on our way to Dig, to be serving them and collecting their blessings. This year by the mercy of my spiritual master I could attend the whole month serving parikrama.

Each day in Vraja is a festival, just singing, dancing and feasting – no work, no office, no connection with the material world. Getting up early and sleeping early, a wonderful routine and in the evening katha, Sri Damodarastakam, Gopi Geetham and drama. My son Nimai made many grannies and aunts in parikrama as all the devotees blessed him with their merciful glance.

Parikrama is also sravan utsava, a festival for the ears. We got to hear katha from many senior devotees and sannyasis: Navayogendra Maharaja, Sundar Chaitanya Maharaja, Krishna Chaitanya Maharaja, Prabodhananda Saraswati Maharaja, Vrindavan Chandra Maharaja and Bhadra prabhu. We meet devotees from all over the world, share our parikrama experiences with them and inspire them to come again. Parikrama is filled with austerities, but the happiness we get in the dham is unparalleled. We always hear that Gokul Vrindavan is non-different from Golok, but one can realize the fact when they come to Vrindavan. We can feel the spiritual vibrations as residents of Vraja keep chanting Radhe Radhe. It’s Radhe Radhe everywhere. Each place reminds us of Lord Krishna. Chanting sixteen rounds becomes a big task for me, but in Vraja chanting goes on spontaneously. One chants sixty-four rounds easily. That’s the miracle and mercy of the dham.

This one month is a package of kathas for us. The two main festivals are Govardhan Puja and Srila Prabhupada’s disappearance day and many devotees joined parikrama for those occasions. Sacinandan Maharaja, Radha Raman Maharaja, Sarvabhauma prabhu and Akhildhara prabhu also attended the festivals and blessed the devotees.

Parikrama continued perfectly with no rain. November 8 was the last day and that evening it rained a little and the next day also. It was all the mercy of Srimati Radharani that She allowed us to walk in Her dham. At Raval, Radharani’s birthplace, some devotees shared their realizations while others cried and sought forgiveness for their offences. As we walked to Mathura from Raval on the last day of parikrama our hearts were heavy and our steps slow. Now we would depart to meet again next year at Kartik. 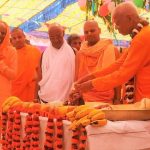 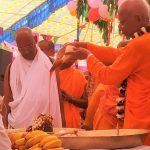 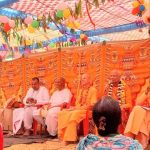 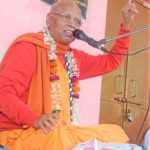 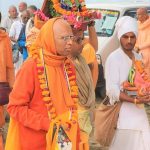 Lokanath Maharaja walked with us in parikrama 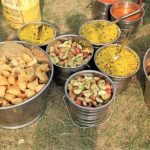 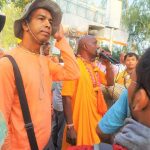 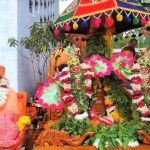 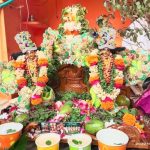 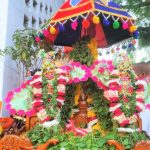 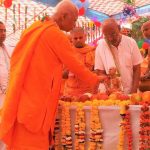 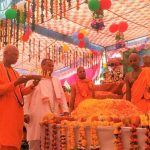 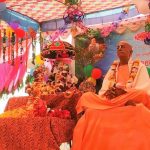 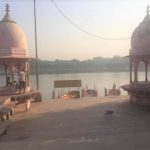 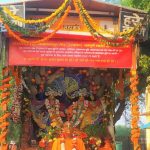 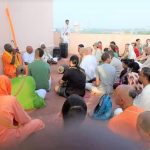 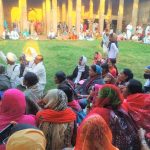 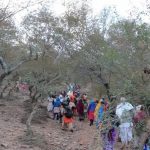 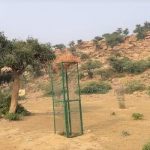