Discovering Krishna’s will during Czech Padayatra 2021

While the world was still gripped by the Covid-19 madness the twenty-ninth Czech Padayātrā took place in the second half of July, and according to its participants was one of the best padayātrās in which they’d been involved. For a second successive year we were able to find a sweet spot during the summer holidays when most of the restrictions had been lifted. After all those lockdowns people were happy that something was going on and as there were almost no other events, padayātrā was often the main thing that was happening in a village in the summer.

The team of organizers led by myself and Varada Krishna prabhu started to prepare the route in late April just before a major lockdown. While calling village mayors and directors of schools we were aware that eventually we might have to call off the whole festival. At the same time, we knew that with the summer holidays approaching the government would try to loosen the restrictions and by then people would be hungry for entertainment and we would lose a golden opportunity for sharing Krishna consciousness if we backed away and did nothing. Krishna proved our expectations to be right and when D-day came, we gathered from all corners of the country for a two-week transcendental adventure. Not only were people thirsty for something to do but devotees were happy to leave their homes to take part in spreading Krishna’s holy names, resulting in around fifty devotees attending every day.

Padayatra started on July 18 in Susice, a small town 160km south of Prague and a favourite destination for paddlers who like to swim downstream in the Otava river that runs through the area. During the next two weeks we walked eastward loosely following the river for 110km and on July 31 reached our final destination at Pisek, our twelfth stop and the largest town on our route with a population of 30,000. This year we also welcomed four special guests. Mahavishnu Swami came with the Harinama Ruci group and spent three magnificent days with us. It was his second visit to the Czech Republic after an absence of almost thirty years. Bhaktivaibhava Swami, the GBC representative for Czech, visited us and liked it so much he returned two days later. The highlight of padayātrā was Kadamba Kanana Swami, whose visit was the shortest but the most intense with a record 100 devotees participating. The last guest was Jay Gurudev prabhu, one of Srila Prabhupada’s four Czech disciples.

The harinama procession was the main feature of padayātrā and took up the biggest part of the day, sometimes up to five hours. This year’s harinamas were exhilarating due to the number of devotees attending every day and usually there were many harinama leaders. The Maharajas were a big draw because all of them are experienced sankirtan devotees renowned for their kirtans. Mahavishnu Swami’s harinamas were bursting with his playful and explosive energy and as Kadamba Kanana Swami’s victory march crawled and thundered through the streets of Strakonice people opened their windows to see what was happening. Bhaktivaibhava Swami also led the chanting in harinamas, but more than that he simply enjoyed being with the devotees and seeing how they cooperated.

With padayatra lasting for only two weeks, we wanted to share as much of Krishna consciousness as possible and also to squeeze the most nectar from it for ourselves. Therefore, padayātrā had a very intense schedule. The days began at 7am with a condensed morning programme. We ran through mangala arati bhajans, deity greeting, guru puja and Srimad-Bhagavatam class and after a short pep talk and announcements for the day, we took breakfast. After prasadam we would clean up the facility where we stayed overnight and then the procession led by our ox-cart and harinama headed to the next destination. In the evening at 6pm we held a two-hour cultural festival at the village or town where we then spent the night.

The harinama might have been the main feature, but the evening cultural programme was certainly the highlight of the day. Over the years we have settled on a simple combination of kirtan, a short talk, Bharat Natyam dance, a drama and prasadam distribution. A feature of this year’s programme was an upgraded version of the Liquid Beauty drama presented by Loka Saranga prabhu and Dayapara prabhu who played the king and the jester respectively. As there was no devotee actress to play the princess, they improvised each evening by seeking a girl or a lady from the public to be the princess. This was, of course, very entertaining for the audience and devotees alike when every day the performance went in a different direction.

During the evening programme our goal was to gradually pull people in to take part, culminating in a dancing and chanting competition. Because this year Mahavishnu Swami was with us during the first days of padayātrā, he gave a special flavour to the competition and the last kirtan, which we tried to follow after he left. While we usually did the last kirtan sitting on the stage, Maharaja made the kirtan party stand up. On the last day of his stay, he could not start the kirtan after his talk due to villagers asking him to autograph the books that they had bought at our book table. While Maharaja was signing the books, he noticed that the devotees onstage were sitting. “Why are they sitting? They should stand up. Somebody, tell them to stand up!” he said. And after that the last kirtans were mostly done while standing and dancing.

Padayātrā is not our festival. Rather it is a festival organized by Sri Sri Nitai-Gaurasundar and Srila Prabhupada in which we were fortunate enough to play a role. The deities go out on a ride with the oxen and we are given numerous opportunities to assist Them. Quite often Their plan remains hidden till the last minute and we have to try our best to unearth Their will, for example with the route, where we were just going step by step and watching if Krishna would lift the restrictions and padayātrā would be allowed to happen. We also have to be on guard for any signs that Krishna wants to correct our course or wants us to improve something. He often lets us know through His empowered representatives, like Mahavishnu Swami who told us to “stand up!” Padayātrā’s success is Sri Sri Nitai-Gaurasundar and Srila Prabhupada’s mercy and according to our understanding the only way to attract that mercy is to do our absolute best and sincerely cooperate in the service of spreading the glories of the holy name from town to town and village to village. 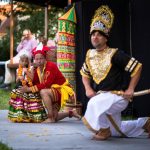 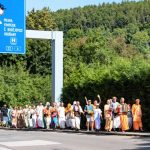 Harinam in a town 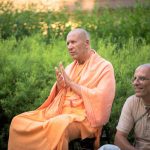 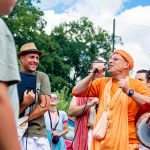 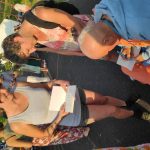 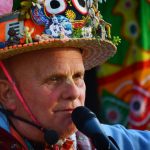 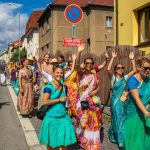 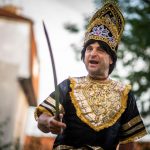 Loka Saranga Prabhu as a king 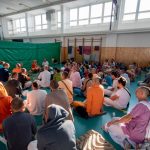 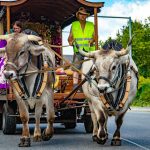 Our oxen Devadata and Pavana 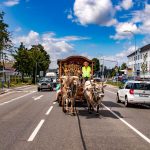 Padayatra cart on the main road in Strakonice 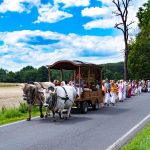 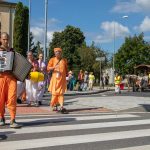 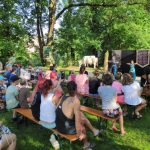