Padayatra Hungary – the path of friendships

From August 1-15, 2022, the Hungary yatra held its annual padayatra around the country’s Lake Balaton, the largest lake in central Europe. For this year’s event we retained last year’s successful slogan, “Take a Leap – On the Road to Change,” which focused on promoting the simple living and high thinking lifestyle we have tried to encourage through the distribution of Srila Prabhupada’s books and Back to Godhead magazine’s special editions on the Hungary Padayatra.

During the two-week walk we visited a total of twenty-two towns and villages – mainly the holiday resorts on the shores of Lake Balaton – where we met Hungarians and tourists as well as refugee families from Ukraine. We found that this year people welcomed the team with even more enthusiasm and joy, as due to social tensions (war in a neighbouring country, an impending economic crisis due to soaring food and energy prices, and political battles within the country) people were visibly yearning for something positive, answers to life’s questions and crises that offered spiritual alternatives. Some of the people we meet year after year told us they had been waiting all year for us to return with that special happiness and energy they have never experienced elsewhere.

And yes, padayatra is very effective and powerful preaching, a real Vaishnava-praacar. Because what happens during a padayatra is we go out to meet the people to pass on Krishna consciousness to others, to be examples of the devotee lifestyle, but at the same time we, the participants, are also walking an inner journey. Just as padayatra is a path that others see from the outside, it is also a path of our inner practice: we do our own practice and show people how to live by our own example. What we preach is what we live every day and when our inner practice, our inner spiritual joy, overflows that is real preaching, praacar. That’s what makes this pilgrimage so appealing to practising devotees, newcomers and the person in the street.

This is why every year Hungarian devotees come from all over the country to join the pilgrimage. Many of them wait for this all year, taking no time off work since this time last year so as to spend as much time as possible at this year’s padayatra. Each year devotees express how important this occasion is to them, that padayatra is a great opportunity to associate in a Krishna conscious way, to practise loving relationships between Vaishnavas, and to give children and young people the opportunity to spend time with their elders in a family atmosphere to learn about book distribution, the service of the devotees and the practical elements of Vaishnava culture.

A total of 120 devotees from nine different settlements across Hungary joined the pilgrimage for a longer or shorter time. The core group, which consisted mainly of full-time devotees from the Budapest temple and a few enthusiastic community members, numbered around thirty but a large number of additional devotees joined the procession daily. During the week the average number of devotees was around forty-five, while on the busy weekends nearly eighty devotees and two oxen from the nearby Krishna valley eco-farm community joined us in harinama and distributed Srila Prabhupada’s books. Among the participants were more than twenty children who engaged with daily services. The youngest padayatri was three years old, the eldest was eighty-one.

Several young newcomers also joined the procession and for them padayatra provided another opportunity to associate intensively with devotees and experience the Krishna conscious way of life in practice. There were also eight people who were in padayatra for the first time. Since then, one of them has joined the Food for Life staff in Budapest and the others regularly attend the preaching programmes.

Alongside the large harinama group, seven to eight book distributors served every day. Throughout the pilgrimage nearly twenty devotees were involved in book distribution and the children in the procession were happy to join in that service. The team distributed 2694 publications – 558 books (mostly Srimad-Bhagavatam) and 2136 Back to Godhead magazines.

There are many inspiring encounters from padayatra, but perhaps the most touching was when we passed by a Ukrainian Roma refugee shelter where children and their parents were waving and shouting out the windows and devotees were giving the kids Gauranga cookies as a token of their love and compassion. In return, one of the refugee girls took off her bracelet and gave it to the mataji who had given her the sweet, accompanied by a big hug. But this encounter was just the beginning. Following the pilgrimage, we contacted the institution and arranged to visit for an afternoon programme, including prasadam distribution, bhajan and kirtan.

This year the padayatris were based in a small rural school for the first week of padayatra and in a village cultural centre for the second week, places where we could rest in simple conditions in classrooms, auditoriums or theatre lobbies. For young devotees used to the city it was a special experience being in an environment so different to their everyday life. They could taste the thrills of travelling sankirtan and practise the simple lifestyle of bathing in the open using a bucket of water and washing clothes by hand. From our base we went out on sankirtan to the resorts and towns around the lake for five to six hours, two locations per day.

In our accommodations we also set up camp kitchens, the responsibility for cooking being taken up by dedicated grhasta couple Sesa prabhu and Madhava-tosani mataji, who worked closely with the temple’s kitchen team preparing wonderful prasadam for all. With their cooking and endless devotion, they contributed greatly to padayatra’s success.

During padayatra we hosted several elderly Vaishnavas. In the first week Madhavananda prabhu and his wife visited us and gave lessons to deepen the pilgrims’ meditation and increase their enthusiasm. In the second week Bhaktipada Goswami Maharaja graced us with his presence. He led a rousing harinama in Szombathely, a city of almost 80,000 inhabitants 100km northwest of Lake Balaton, and blessed the congregation with a class on Balaram Jayanti.

On the last day of padayatra the Budapest temple festival deities – Lord Jagannath, Baladeva and Subhadra Maharani – joined us as we celebrated padayatra’s conclusion with a spirited kirtan, a big feast and an experience-sharing session.

An event of this scale requires much organisation and coordination. The preaching department of the Budapest temple was again responsible for the implementation of padayatra, but without the help and donations of the other temple departments and congregational devotees it would not have been possible. All in all, everyone participated with enthusiasm and thanks to the devotees’ efforts and exemplary cooperation we were once again able to offer a successful programme for the Lord’s pleasure

In closing, let me share with you some thoughts that have been an inspiration for me for years when contemplating padayatra. In his online lesson at the 2020 pilgrimage Madhavananda prabhu spoke about padayatra being the path of friendships. We are all on a journey: we want to reach the supreme Lord to establish our friendship with Him and we want to make friendships on the way to Him.

In the Narada Purana, chapter 36, chant 1, there is a nice description of how friendships can be made. People who understand the principles of dharma say you can establish friendship with someone by taking seven steps or exchanging seven words with them. If someone is not an ordinary person but a very good person, three steps or three exchanges of words are enough to make a friendship. But those who are saintly people make friendship with someone with every step, so in their case one step or the exchange of one word is enough.

During a padayatra pilgrimage we all take many steps together and in doing so form deep friendships with each other. These loving reciprocations with devotees are gifts that stay with us for the rest of our lives. On our journey we meet many people who leave their jobs, their families and their homes to come seven steps with us or exchange seven words with us, and by taking these few steps they make friends with Krishna’s devotees and their lives are changed, just as our hearts have changed and been enriched with profound realizations and acquisitions in every padayatra.

We pray that we can continue this wonderful mission and by our insignificant efforts satisfy Srila Prabhupada and Sri Chaitanya Mahaprabhu, even in a tiny measure. We would like to thank our spiritual masters Srila Shivarama Swami Maharaja, Keshava Bharati dasa Goswami Maharaja, Lokanath Maharaja, Asita-Krishna Maharaja and Madhavananda prabhu for their inspiration and support, and all devotees for their contribution.

Further photo reports and information about Padayatra Hungary can be found at: https://www.facebook.com/padayatrahungary 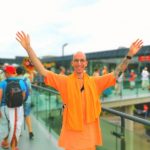 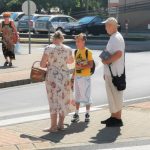 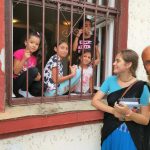 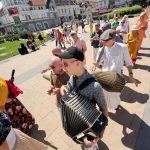 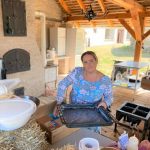 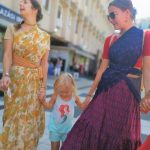 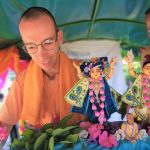 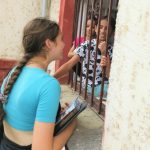 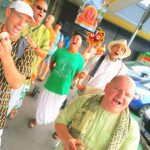 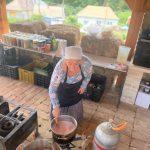 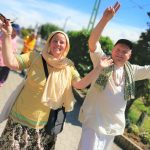 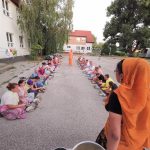 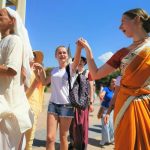 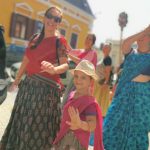 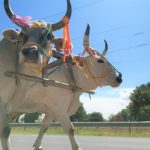 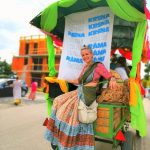 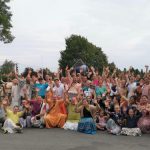 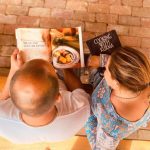 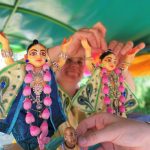 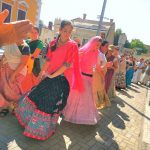 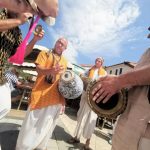