On August 26, 2022, the padayatris faced a small accident, but everything was fine by the mercy of Sri Sri Nitai-Gaurasundar.  We had been staying at a villager’s home in Usar Gaon in Jalaun district. His family members helped us a lot. We had a nice sankirtan and distributed books and halva prasadam in the village. The next day we were getting ready to move ahead, winding up the kitchen and loading the cart. Sri Sri Nitai-Gaurasundar departed and an hour later we got a call from a devotee saying Their chariot had hit a railway crossing gate at a station and to come fast.

We all headed there immediately, taking the tractor and trolley with us. There was already a big traffic jam by the time we reached the crossing. We could see that the gate’s sliding boom was broken. The boom was closed as our chariot had stood at the gate with the train about to come. Within a few minutes the train crossed and the boom began opening slowly, but due to the traffic jam the drivers started blowing their horns continuously.

As the chariot was about to cross, instead of going up the boom was coming down but horns were going on and on. As the boom closed our chariot and the boom collided. Because of the collision, the buzzer started ringing. Because of the harsh ringing of the buzzer, our bulls Rama and Lakshman became disturbed and started running faster. In all of this, our chariot hit the boom and it broke and fell upon Rama, but it was not heavy enough to cause any harm to our dear one.

As the boom broke, so the workers there became angry and blocked the padayatris’ way, not allowing the cart to cross the tracks. That’s why there was a traffic jam. After some time, we made a call to the Railway Police Force (RPF) and eventually five policemen arrived at the station.

We explained to an officer that our oxen had been frightened, resulting in the mishap. He said the case either would be filed for damaging railway property or we would have to pay a fine, but by the mercy of Sri Sri Nitai-Gaurasundar he reconsidered and told us to go – but if we were needed, we would be called. “Yes, we will come whenever needed,” we replied and made ready to leave. One devotee gifted the officer a Bhagavad-gita, which he was happy to receive, and we proceeded to the next village. We haven’t heard from the RPF.

Once again, we were back on the road ready to serve Their Lordships. Thus, Sri Sri Nitai-Gaurasundar always protect us from all dangers. And of course, Srila Prabhupada’s books are the wealth we carry and wherever there is a problem Bhagavad-gita is the answer. 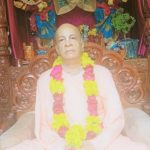 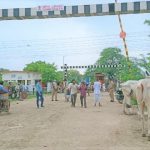 At the railway gate 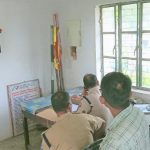 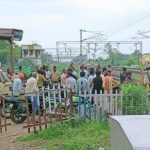 Our chariot at the railyway gate 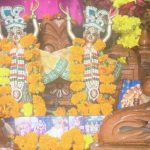 Our shelter our Lord 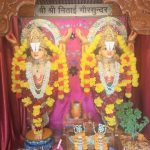